Overrated. Bottles the big games. Touch like a bulldozer. Donkey.

Just a flavour of the many, many insults that were hurled at Romelu Lukaku during his time in England. They weren’t all unfounded, but in hindsight, it’s fairly obvious that his scapegoating by Manchester United fans – which ?ultimately contributed to his dramatic deadline day departure – was, for the most part, unfair.

That was hinted at while he was at United by the obscene rate at which he hammered them home for the Belgian national team, and since joining Antonio Conte’s revolution at Inter, it’s been driven home by a nine-iron.

With 15 matches still to play, Romelu Lukaku has surpassed his best ever league goal return for Manchester United

His 21st of the season in what was his 30th Inter game settled ?Sunday’s Milan derby and put his side top of ?Serie A. It was set up by Victor Moses, and came moments after Ashley Young had been withdrawn, having run himself into the ground for his new side over 90 minutes.

It was watched on from the bench by Alexis Sanchez, who had earlier taken Gianuigi Donnarumma for a walk before laying off Matias Vecino to level things up. In his place on the pitch was Christian Eriksen.

All of those players are of course managed by a man who won the Premier League in 2017 and the FA Cup in 2018, but still somehow found himself out of a job by the time the following season kicked off. 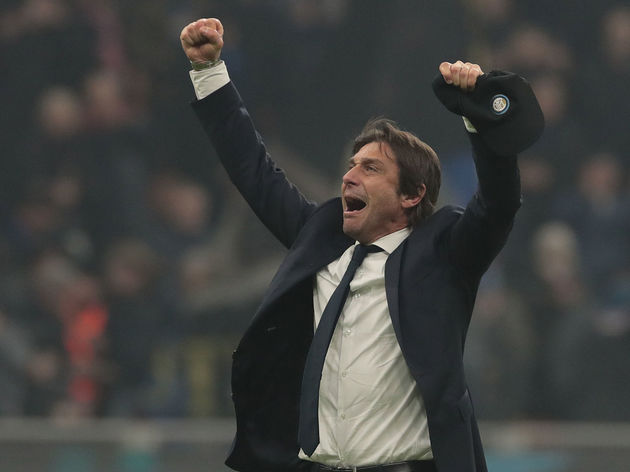 It’s summarised best by ?Lukaku, but it’s by no means an isolated incident; the Premier League has a real problem with patience.

Each of those players should of course be taken as individual cases. Eriksen, for example, remained wanted at Tottenham up until the day he left, while Sanchez’s form had indisputably gone off a cliff before Ole Gunnar Solskjaer opted to left him go for a season.

But the fact that five players and a manager once cast off by the ‘best league in the world’ are on course to win Serie A isn’t because the latter is a ‘farmer’s league’ or any other tripe lazily regurgitated by the legions of twitter eggs and their arsenal of cry-laughing emojis; it’s emblematic of a wider issue.

Got called all sort of names by his previous fanbase. Insults were regular.

Came here and experienced the same from certain crowd which was too clingy to the past.

The future is no way predictable, but 21 goals in 30 games later, Lukaku is proving most, if not all of us, wrong. pic.twitter.com/1r7iqxInUY

How many players, after all, do we see cast aside by Premier League clubs, only to return a few years later immeasurably improved, having been given a chance to grow elsewhere? Mohamed Salah and Kevin de Bruyne spring to mind; Jadon Sancho might not be far behind, while United once saw fit to spend close to £100m on a player they released to Juventus for next to nothing.

Throw in a seasoning of the sort of ego that sees Jurgen Klopp and Pep Guardiola vilified for daring to speak out against minor aspects of the FA Cup, and is there any wonder it is too much for some players?

First Klopp, now Guardiola. Both disrespecting the tradition of the Cup.

The replays, away ties to Lower (Leagues 1 and 2)/Non League sides (National League or lower), even the potential #Cupset. That’s what makes the FA Cup so famous all over the world @FACupFactfile.

None of that is present to anywhere near the same extent in Serie A, which is why Eriksen, Lukaku, Moses, Sanchez and Young – all once the flavour of the month in England – are starring in a team turning the Italian status quo on its head.

None of those players, nor their manager, ever lost their ability; English football just lost patience with them.

Of course, it’s wide of the mark to suggest this formidable Inter side is formed only from Premier League cast-offs. Three of the five previously mentioned joined only in January, while one of the two recruited in the summer has spent most of the season on the sidelines with injury. At its core is the fearsome defensive trio of Milan Skriniar, Diego Godin and Stefan de Vrij, while the judiciously-balanced midfield triumvirate of Marcelo Brozovic, Matias Vecino and Nicolo Barella run the show in midfield. It isn’t Sanchez who regularly partners Lukaku; that spot belongs to the equally-prolific Lautaro Martinez, who headlines a catalogue of talented players who don’t have nor need a spell in the Premier League to validate their respective CVs.

Should the English-inspired flavour to this ?Inter team indeed help Conte to his sixth Serie A this season, however, it should nonetheless serve as a lesson to the kind of short-termist thinking that dominates football landscape in the world’s most expensive division.

The Premier League and Serie A are two exceptional leagues, united in their diversity and divided in their prevailing style. From a footballing standpoint, it’s a redundant debate to deem one better than the other.

The former, however, is crippled at least in part by branding and perception, and the furious impatience that comes along with it.

In the meantime, Inter are quite happy to keep profiting from the Premier League’s profligacy, and could well have a Serie A medal to show for it come May.