Last week at 90min towers, thanks to our two good friends the internet and webcam, seven highly esteemed football writers, journalists and all around swell guys took part in an American-style draft.

Some of us had a plan, some of us had no idea what we were doing and some of us were intent on simply winning the millennial public vote (ahem, ?Scott Saunders).

So in a throwback to my Year 10 days at secondary school, where I spent most of my time imagining dream teams and drooling over how good Alessandro Nesta and Fabio Cannavaro were, I assembled what can only be described as the greatest team of all time.

We have pace, power, flair, versatility and, most importantly, a bruising leader of men ready to kick six bells of sherry trifle out of the opposition. Shame I didn’t get Nesta or Cannavaro, mind.

Still, want to see who I did get? Of course you do, so here you go! Manuel Neuer (GK): – You’ll get the idea very early on here that my main aim was to play the most beautiful football imaginable.

Intricate passing of the ball, slick movement between the lines and not surrendering possession for a single minute of the game. To do that, I needed a keeper who is good with the ball at his feet – so why not pick the man who revolutionised the sweeper keeper role that we now all use on Football Manager?

Yes, everyone else groaned and said ‘ooooh he has a mistake in him’, which may ring true – but ?Neuer’s also a bloody exceptional shot-stopper and has a wing span that I’m reliably told is equivalent to an Airbus A-380.

Philipp Lahm (RB): To make any system work effectively, you need efficiency, reliability and more than one German.

So, it seemed obvious to me that Lahm was the natural fit at right back – as he can slot into midfield when we’re stroking the ball around, can charge up and down like a mad man (if he wants) and he’ll win it back if by some miracle, possession is surrendered.

Gaetano Scirea (RCB): Granted, Scirea is not your typical centre back. He can tackle, yes, but it’s his distribution and ability to step into midfield with the ball that I wanted. Not only was he a phenomemal libero, he was as cool as a cucumber – a perfect recipe for this side.

Some will say that his gentle nature and clean disciplinary record counts against him, but I’d argue that it just made him a bloody good bloke. Marcel Desailly (LCB): My confidence in this defence owes to the fact that if you skip past Scirea, there’s no chance in hell that you’re getting past Marcel Desailly.

Strong in the tackle, ridiculously quick and a real powerhouse of a man, the Frenchman adds the steel and determination needed to hold this backline together. The most beautiful thing about this partnership is that Desailly is not just a leader and a great defender, he’s also an exceptional passer of the ball.

Ruud Krol (LB): It’s a funny thing to say, but when you look back over the course of time, there haven’t actually been that many great left backs.

We’ve seen plenty of very, very good ones but not many can stick their head over the parapet and say ‘I was great!’.

One who can, though, is Netherlands legend Ruud Krol. As this team evolves, you’ll know exactly why I picked Krol to patrol the left hand side, but I’ll run through some other reasons nonetheless.

A) Very versatile and can cover lots of different positions.

B) Was a part of the Dutch ‘total football’ revolution in the 1970s.

C) Could do basically everything you’d want him to do – run quickly, tackle, pass and shoot.

D) His name is Ruud.

But if we do, here’s the man that will get it back. If he doesn’t, he’ll chop you down and give you a tongue lashing while you’re on the deck. My kind of guy and my kind of captain. Johan Neeskens (CM): Every team worth its salt needs a good box-to-box midfielder.

One who can be filled up with 125 litres of petrol, toddle around for the entirety of the game, be impossible to pick up and also close down the opposition at every opportunity.

Next to Keane, it’s a dream partnership – and one that will scare any opposition.

Ruud Gullit (AM): Did I already mention the versatility of this team and the fact that everybody can basically play anywhere?

Good, because when it comes to Gullit, he really can play everywhere. Intelligent, fast, with a tremendous eye for a pass, there’s really not a lot that the Dutchman couldn’t do.

Roberto Baggio (AM): When I was growing up, the first thing that I could really remember about Baggio was that he missed a very important World Cup final penalty.

So that immediately makes you think, bad.

But actually, Baggio was good. He was ?very, very, very good – and in 1993, he was confirmed as the very best – after nabbing the Ballon d’Or.

Probably the greatest player ever produced by Italy, his creativity, passing range and habit of scoring corking goals made him standout head and shoulders above his peers. In this side, he’s another wonderful cog in a wonderfully well-oiled machine.

Johan Cruyff (AM): I know, I know, how on earth did I manage to get all of these players?

I couldn’t quite believe it myself, but I knew that my second round pick of Cruyff – a three-time Ballon d’Or winner and pioneer of the most beautiful football ever seen – 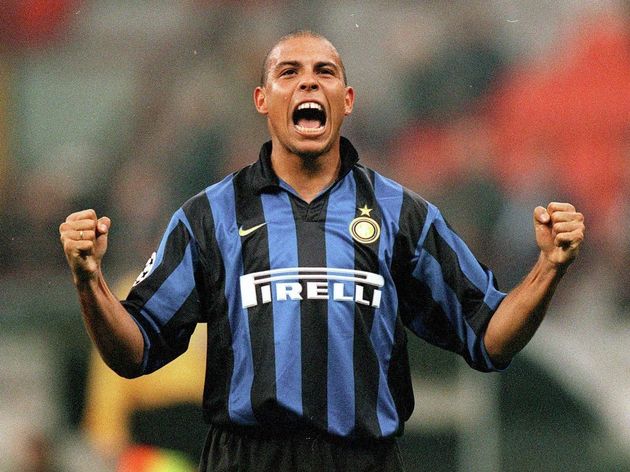 Ronaldo (ST): There was only man I wanted leading this team up front, and it’s the most wonderful out-and-out striker to ever grace this earth.

If you had the pleasure – like I did – of watching most of Ronaldo Luís Nazário de Lima’s career, you’ll know that he was in a different league to anybody else. There wasn’t a single thing that the Brazilian couldn’t do, and not only that, everything he did do was of the highest possible standard.

A true nightmare for defenders, Ronaldo was borderline unplayable during his peak – and, of course, for the purposes of this draft, it’s his best ever version that will be tearing my six other chums to shreds.

It’s also why he was my number one pick.