Hello, bonjour and welcome to another trip back into the footballing archives.

So grab a pint of….something and soak up your latest dose of nostalgia.

All Square at Goodison Park 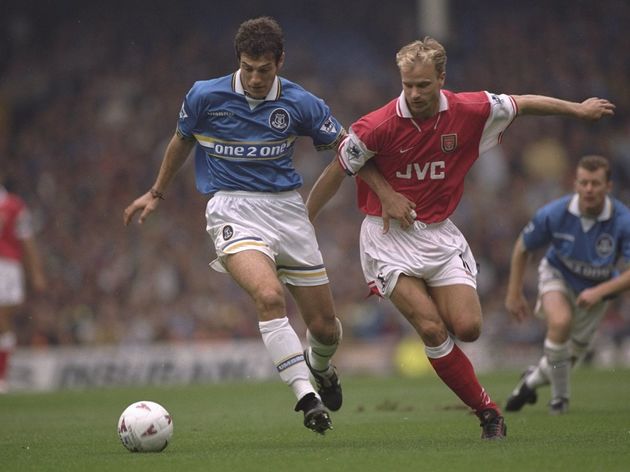 Our first trip into the Tardis takes us back to Goodison Park and a 1997 Premier League clash between Everton and Arsenal.

The Gunners were about to embark on a first title winning season under Arsene Wenger, but walked away from this early season clash wondering how on earth they had thrown away a two goal lead handed to them by This next trip down memory lane features for various reasons. For one, it was the season where West Ham donned one of the most wonderful sponsor-less kits in Premier League history.

Secondly, the Hammers goals were scored by John Hartson and Eyal Berkovic – who at this point had a pretty decent relationship both on and off the pitch (that would sour somewhat after Hartson intentionally kicked Berkovic in the face a year later). And thirdly, because Liverpool’s consolation goal was an absolute cracker from Robbie Fowler.

What did he do you ask? Lingering on the edge of the box, Fowler clinically volleyed past Ludek Miklosko in goal from 25 yards out – leaving the Czech Republic international with no chance. Pity it counted for nothing eh. 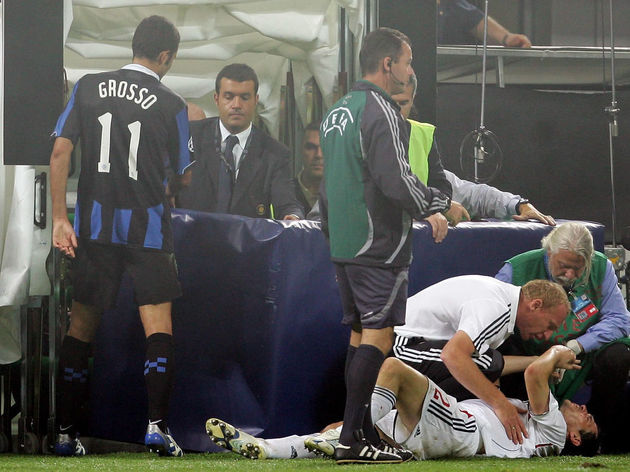 Zlatan Ibrahimovic got the ball rolling out the San Siro, seeing red early on in the second half after picking up two yellow cards. Not wanting to be outdone, World Cup winning Italy star Fabio Grosso skipped the whole booking stage by scything down full-back Willy Sagnol. A straight red was produced and bam, Inter had nine men.

It cost them as well – with goals from Claudio Pizarro and Lukas Podolski leaving the flare throwing fans that remained inside San Siro rather displeased. It’s been four years since Manchester United left back Luke Shaw made his debut for the Red Devils. FOUR YEARS!

Now that that’s been digested, let’s move on. The £30m signing from Southampton had been part of matchday squads up to this point, before finally being awarded a starting spot by Louis van Gaal against West Ham. Shaw’s debut would go pretty well – with the home side running out narrow 2-1 winners at Old Trafford.

Shaw now has 48 appearances in the league under his belt – and touch wood, all of his injury problems are behind him. Little did we, or Sam Allardyce know it, but in this picture FA Chief Executive Martin Glenn was pointing to the emergency exit. Why? Because the England boss would be in swift need of it just days later.

The circumstances of Big Sam’s departure from the national team job were nothing short of farcical – but did at least provide us with an insight into his drinking habits, as well as his willingness to engage in ‘unwise’ conversations.

The drink in question – a pint of wine. A little unusual you may say, but that’s what Allardyce appeared to be indulging in as he sat back and discussed all things unethical with an undercover newspaper journalist. We’ll never know for sure mind you. 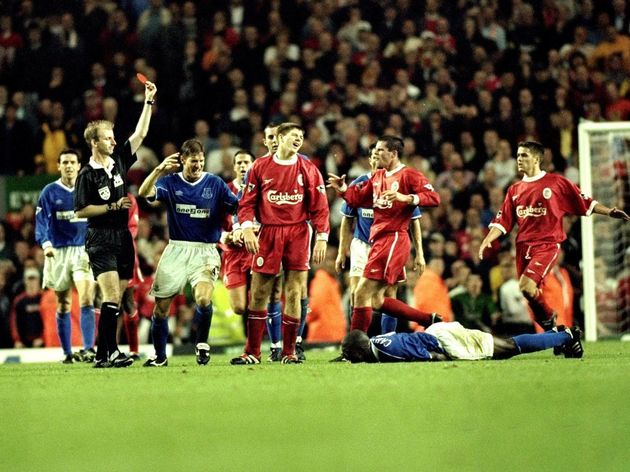 There have been plenty of fiery Merseyside derbies down the years. Go back almost two decades and you’ll find an absolute rip snorter at Anfield, filled with adrenaline and flailing arms.

The result of the game was actually settled as early as the fourth minute, as Everton’s Kevin Campbell grabbed the only goal. The headlines however would be stolen by Liverpool’s goalkeeper Sander Westerveld, and young Everton striker Francis Jeffers.

The pair took exception to each other you could say, and ended up engaging in a bout of fisty cuffs. The duo saw red as a result, but the drama wouldn’t stop there. Aged just 19, a young Steven Gerrard would get in on the act – shown his marching orders in the dying embers as tempers boiled over once more.