Inter hitman Romelu Lukaku can’t seem to stop scoring, as he netted another great goal for Belgium, but Cristiano Ronaldo saw controversy for Portugal and Devis Mangia made Malta history.

Belgium found it more difficult than expected in their trip to the Czech Republic, falling behind at the dawn of the second half.

However, Lukaku ran onto a Kevin de Bruyne through ball, turned the defender inside out and blasted in the equaliser.

That was his 59th goal for Belgium, his 19th in the last 16 international appearances, and the 10th consecutive qualifier on target.

Dries Mertens also went off after a knock to the shoulder and Belgium hung on towards the end for a 1-1 draw.

Portugal also drew, but they had a 2-0 lead in Serbia with a Diogo Jota brace, only to fumble it in a 2-2 final result.

Aleksandar Mitrovic and Filip Kostic were on target and Fiorentina defender Nikola Milenkovic was sent off.

Ronaldo thought he’d won it with a shot that was cleared off the line, but video seemed to suggest the ball had entirely crossed over.

There is no VAR or goal-line technology in these World Cup qualifiers, so it was not given.

Italian coach Devis Mangia is doing impressive things with Malta, as they were 2-0 up at half-time away to Slovakia.

It was remarkable considering Malta had not managed to score any goals in their last 13 away World Cup and European Championship qualifiers.

The last time they got two goals in any qualifier was a 3-2 loss to the Czech Republic in 2001.

Slovakia got it back to 2-2, including a Milan Skriniar diving header, but it’s already a good result for Malta.

It’s nothing compared to the true shock of the night, as Luxembourg grabbed a 1-0 win away to the Republic of Ireland. 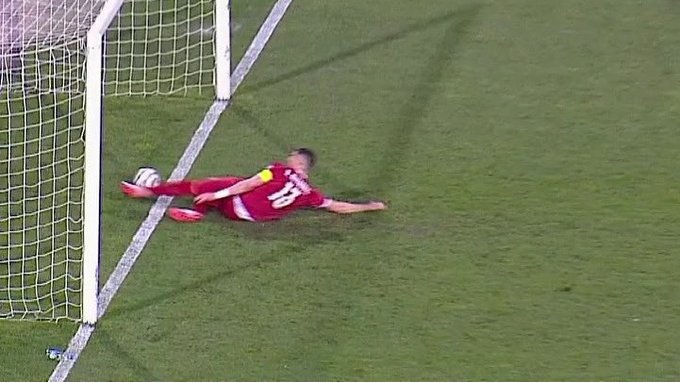