?Italian football has been enjoying a renaissance of late, and objectively had the best title race of any of Europe’s top five leagues last season. Maurizio Sarri’s Napoli side ran Juventus as close as they could, and after Kalidou Koulibaly’s last minute winner against the Old Lady in April, harboured genuine hopes of upsetting I Bianconeri’s monopolistic apple cart.

Unfortunately, despite collecting an unprecedented 91 points, I Partenopei once again fell short to the domineering side from Turin, before promptly losing their greatest ever manager and one of their most important players. In the same summer, the seven-peat Serie A champions have brought in the winner of the last two Ballon d’Or – making the title race a forgone conclusion.

Or so they thought.

Because, undeterred by their conglomerate backed ‘?World Tribe’ of a rival, both Milanese clubs have set to work on closing the gap – now seemingly vacated by the Neapolitans – between themselves and their #contajus counterparts.

[As an aside, if you were wondering, it was at the exact moment that hashtag was created that modern football ventured beyond the point of no return.]

The cross-town adversaries have both plugged major holes across the pitch, but it’s probably ?Inter who have made the most waves. Naturally, the eye-catching captures of Radja Nainggolan and Stefan De Vrij (for a lopsided combined fee of around £33m) from opposite sides of the Italian capital have provoked the most buzz.

The duo have been lingering around the top of the Serie A power rankings for their respective positions for some time now, and should slot seamlessly into Luciano Spalletti’s starting XI. The Dutchman was the central fulcrum of Lazio’s back three last season, and could end up occupying the same role this time, if the pre-season’s experimentation with a 3-4-1-2 is anything to go by, but would be equally comfortable in the coach’s standard 4-2-3-1 formation.

Having coached Nainggolan through the best season of his career in 2016/17 at Roma – the Belgian had a direct hand in 21 goals that year – Spalletti will be all too aware of the impact he can have, and his system is ripe for accommodating such a player. But you could argue that it is the additions of the energetic Lautaro Martinez and Keita Balde that could be the most transformational. Too often last season, Inter were languid in possession, their patient build up verging on the pedestrian and predictable, mainly thanks to a lack of pace across the midfield and front-line.

Save for Ivan Perisic, there was very few outlets on the counter for Il Biscione, and thus the slow progression in attack was necessary. The newfound, and considerable, pace of Monaco’s Keita Balde should help counteract this issue, while Lautaro Martinez’s burgeoning relationship with Mauro Icardi should aid the Argentinian from getting too isolated.

His record of seven goals in seven – albeit largely irrelevant – pre-season games hints at his goalscoring chops as well, though the Gabigol caveat remains.

Throw Croatian World Cup starlet Sime Vrsaljko into the mix, and the overwhelming takeaway from their summer moves can be comprised by the wealth of options they now possess. While last season’s starting XI practically picked itself, the contractually renewed manager has a wide variety of players and system he could deploy, something he’ll undoubtedly exploit to great effect.

Turning the focus from Inter to their San Siro siblings, the differences in intent and direction seem worlds apart. With Inter’s hopes resting on tactical astuteness and execution, as well as a blanket level of experience, the red half of Milan is encompassed by passion, and a daring mixture of young and old. 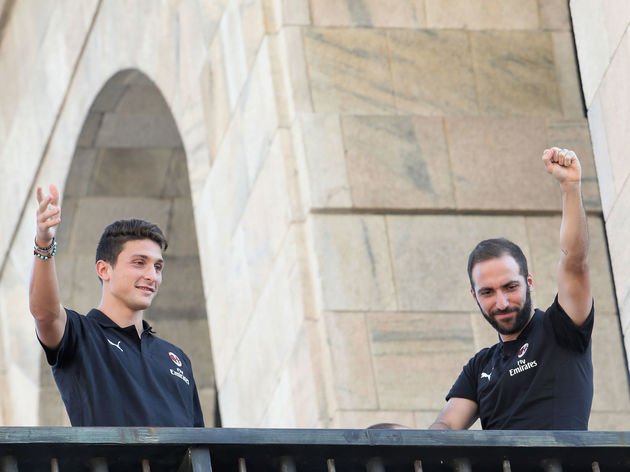 Though Ronaldo’s signature was seismic in it’s impact across the league, you could argue that the Leonardo Bonucci swap deal with Gonzalo Higuain and Mattia Caldara is more significant in the grand scheme of things. Juve clearly have their reasons for bringing back the one-time deserter, but it’s hard to escape the fact that I Rossoneri have emerged superior from it.

The Argentine striker has been the most successful goalscorer in ?Serie A since his arrival in Naples in 2013, and there’s no club more suited to such a player than Milan, who’ve been strikingly absent of a decent striker for far too long.

Snagging Caldara, who is definitively one of the league’s most precocious defenders, is equally impressive, and most ?Milan supporters would tell you he’s actually an upgrade on Bonucci. The slightly lower key gratuitous acquisition of Pepe Reina will surely aid the development of Gianluigi Donnarumma, as well as providing a much-needed wise ahead amongst the litany of youngsters.

Of course, part of the problem with Il Diavolo in recent times has been an over-reliance and over-use of the transfer window to solve issues. In this vein, it is probably an off the pitch addition that has raised the most eyebrows in Italy, in regard to their chances.

After years of rejection, the 18 time Scudetto winners have finally convinced club legend Paolo Maldini that the current project is worthy of his involvement, with the 50-year-old becoming the club’s Director of Strategic Development. This was presumably in turn thanks to the financial turmoil that has ravaged them being quelled by the intervention from Elliot Management, saving the European blushes with the same brush.

Admittedly, it would be naive to outline the shrewd business done by both sides in Milan without acknowledging the additional work done by I Bianconeri – Emre Can and Joao Cancelo stand out as two figures who will make a tangible difference to the existing squad.

But there is also a discernible air of Champions League challenger surrounding them at the minute. After years of outwitting their opponents with long-term thinking, ?Juventus have opted for short-term fixes this time around. Obviously, Ronaldo is a 33-year-old the like of which the world has never seen, but he is still 33, and you would forgive him for duly prioritising those massive European nights that he’s explicitly been brought in for.

It is precisely that European focus that will entice the two Milanese giants, offering them legitimate hope that this emerging Serie A renaissance can spark a new age of success for at least one of the sleeping Italian giants.