Walter Mazzarri’s men have struggled for goals recently, and Al Hain-Cole thinks this will cost them when they travel to take on a team who have been almost impregnable at home

The Derby d’Italia takes place in Serie A on Sunday as Inter travel to Turin to take on Juventus.

After crashing out of the Coppa Italia against Roma the previous Tuesday, la Vecchia Signora dropped points in the league for the first time in 13 games with a 1-1 draw away to Lazio, but are clear 2/5 (1.40) favourites with Betway to get back to winning ways in this one. 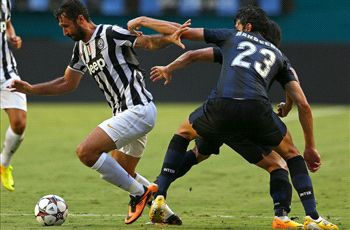 Meanwhile, Walter Mazzarri’s men are yet to win a game in 2014 and are 13/2 (7.50) outsiders to end that run at the sixth attempt in the champions’ back yard.

The last two meetings between these sides have resulted in draws, and there are odds of 7/2 (4.50) available on them cancelling each other out for the third match in succession.

This rivalry has a long history as one of the most heated in Italian football and the atmosphere is sure to be particularly tense on Sunday after the Nerazzurri caused controversy by pulling out of a proposed swap deal involving Mirko Vucinic and Fredy Guarin at the last minute. 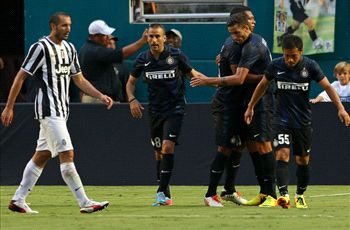 While the suggestion of swapping the influential Guarin for a player that has started just four Serie A games this season was unsurprisingly met with outrage from the Interisti, there is no doubt that their team are in need of some extra firepower given their recent displays.

Having started the season in prolific form, the visitors have now hit the back of the net just twice in their last six games, failing to score in any of their previous three games on the road.

This does not bode well when they travel to take on a side who have kept seven clean sheets in their last eight home games in domestic competition, conceding just six goals in 15 Italian matches in total.

Having swept aside all comers in their 11 domestic games at Juventus Stadium this season, odds of 13/10 (2.30) are well worth backing on the hosts winning to nil for the eighth time in nine when they take on a team without an away goal to their name in any of their last three consecutive defeats.

Sign up with Betway and get a free £50 bet