Leonardo Bonucci’s fierce close-range volley and a late penalty from Alvaro Morata saw Juventus beat Inter 2-0 in the Derby d’Italia to move four points clear of Napoli at the top of Serie A.

Juventus led a minute after the interval in Turin on Sunday, Bonucci smashing in a volley from four yards after a poor defensive header by Danilo D’Ambrosio.

Morata made sure of the victory by beating Samir Handanovic from the penalty spot with 10 minutes to go after the striker was fouled by Miranda shortly after entering the game as a substitute.

The defeat means Inter’s poor 2016 form continues – they have won just two of their nine league games since leading the table at the mid-season break – as they struggled to create clear chances against a Juventus defence that has now kept eight successive clean sheets in Serie A.

Hernanes almost opened the scoring against his old employers within five minutes, smashing a thunderous 25-yard drive that was brilliantly tipped on to the crossbar by Handanovic.

The league leaders started on top and Handanovic had to save another long-range effort after 14 minutes, diving low to his left to deny Hernanes again, before the Slovenia international saved a Mario Mandzukic header. 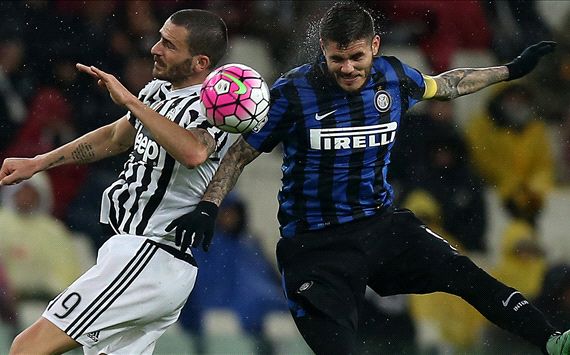 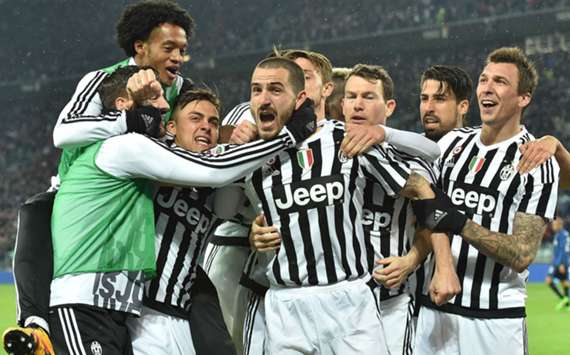 Alex Sandro almost headed into his own goal under close attention from D’Ambrosio after 23 minutes, then Icardi missed a terrific chance as Inter grew into the match.

Rodrigo Palacio shrugged off Paul Pogba and bent a delightful cross into the box, but Inter’s captain, who had scored six goals in six Serie A games against Juventus, got his finish all wrong.

Palacio should have done better with a header from an Alex Telles free-kick after 43 minutes, planting his effort straight at Gianluigi Buffon.

Juventus took the lead a minute into the second half and the visitors only had themselves to blame.

D’Ambrosio headed Paulo Dybala’s free-kick directly to Bonucci, who made no mistake with a powerful volleyed finish from close range.

Substitute Adem Ljajic hit an effort off target after 63 minutes as Inter, who have not beaten Juventus since November 2013, battled to break Allegri’s side down.

Juventus sealed the points with a late penalty, Morata confidently converting from 12 yards after Miranda bundled him over in the box.

Buffon made his first save of note with just two minutes to go, turning a 30-yard free-kick from Ljajic away and catching Felipe Melo’s rebound strike. He then denied Eder from a shot on the turn in the six-yard box as Inter proved unable to breach the watertight champions’ rearguard.