The Nerazzurri have been struggling of late, but Al Hain-Cole expects the return of Diego Milito to help them ease to victory against Eugenio Corini’s out of form team

Inter will be looking for their first win of 2014 when they welcome Chievo to San Siro on Monday night.

Having beaten local rivals AC Milan 1-0 in the Derby della Madonnina before the winter break, Walter Mazzarri’s men have crashed to consecutive defeats since the turn of the year, but are 9/20 (1.45) favourites with Paddy Power to get back to winning ways this evening.

The Volanti have lost their last five consecutive games against these opponents and are outsiders at 6/1 (7.00) to pull off a shock win tonight.

The hosts have drawn two of their last three Serie A games in front of their own fans, and you can get odds of 10/3 (4.33) on the sides cancelling each other out in this one.

After crashing out of the Coppa Italia against Udinese on Thursday, the pressure is on Mazzarri to inspire an improvement in his team’s league form.

The Nerazzurri have now won just two of their last eight fixtures and are in danger of being cut adrift of the European places in the table, so will be grateful for a match against tonight’s struggling opponents. 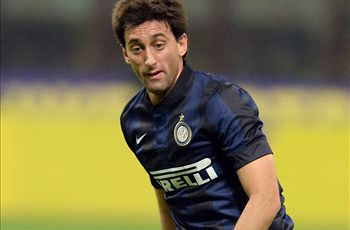 Eugenio Corini’s men are without a win in their last four matches and are unlikely to end that run against a team with just one defeat to their name in 11 home games this season considering they have lost six of their last nine on the road.

In fact, having lost their last two away games by an aggregate scoreline of 6-1, another heavy defeat looks likely against these opponents and odds of 13/10 (2.30) are not to be missed on the hosts winning by at least two goals for the fourth time in five meetings between the sides.

Inter will be particularly confident of putting their guests to the sword after the return from injury of Diego Milito, who will bolster the attack after completing his first 90 minutes of the season against Udinese.