With Keisuke Honda having completed his free transfer from CSKA Moscow to AC Milan earlier this week, the gifted attacking midfielder is now poised to make his Serie A debut in Sunday night’s meeting with Sassuolo.

Consequently, Goal has decided to pay tribute to Japan’s proud footballing heritage by putting together an all-star XI consisting of the country’s most successful exports to Europe.

The obvious choice in goal is Eiji Kawashima, who left Kawasaki Frontale for Belgian outfit Lierse in 2010. The shot-stopper was handed the captain’s armband after only one season at the Herman Vanderpoortenstadion before earning a move to current club Standard Liege the following year.

Given relatively few Japanese centre-halves have had the opportunity to ply their trade in Europe, picking a defence was a tricky proposition. Consequently, we’ve decided to go with a rather unorthodox back three comprising Atsuto Uchida, Maya Yoshida and Yuto Nagatomo.

Uchida joined Schalke from Kashima Antlers in 2010 and picked up a DFB-Pokal medal at the end of a hugely successful first season in Gelsenkirchen. The right-back remains one of the German club’s most reliable performers.

Yoshida is enduring a difficult second season at Southampton but he made 32 Premier League appearances for the Saints following his switch from VVV in 2012.

As for Nagatomo, he has taken to Italian football like a duck to water. He joined Cesena from FC Tokyo in 2010 but was on his way to Serie A giants Inter after only one season at the Dino Manuzzi. The left-back is currently enjoying his best season yet with the Nerazzurri, having hit four goals in 16 league appearances to date.

Our midfield is a tad imbalanced but it is undeniably packed with poise and panache. The enigmatic but incredibly talented Hidetoshi Nakata – who played for five different clubs during a successful eight-year spell in Serie A in which he won a Scudetto with Roma – lines up on the right-hand side.

The aforementioned Honda is partnered in midfield by Yasuhiko Okudera, who became the first Japanese to play in Europe when he was signed by FC Koln from Furukawa Electric in 1977. He spent nine years – including five at Werder Bremen – plying his trade in Germany before returning to his former club.

On the left-hand side, meanwhile, is the incredibly versatile Shinji Ono, who had four successful seasons at Feyenoord and three at Bochum. 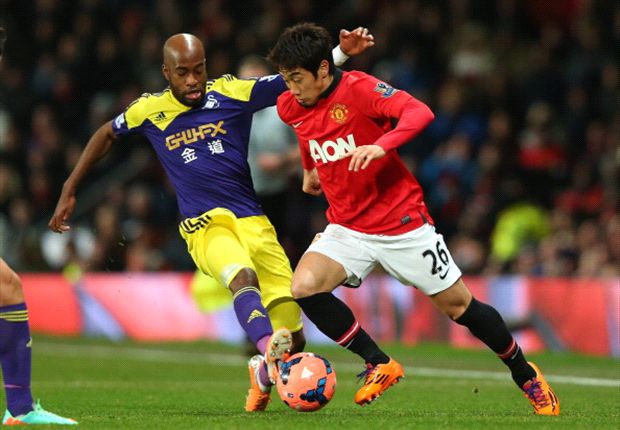 Red Devil | Kagawa one of Japan’s leading stars in Europe

As already evidenced, we had a number of contenders for the two berths in behind our lone forward but, ultimately we’ve decided to plump for fleet-footed No.10s in the shape of Shunsuke Nakamura and Shinji Kagawa. The former, of course, became a legend at Celtic after joining from Reggina and then going on to represent Espanyol for a solitary season. Kagawa, meanwhile, may not be enjoying a great time of it at Manchester United at present but the attacking midfielder proved his class during two title-winning seasons at Borussia Dortmund.

To lead the line of this wonderfully attacking side, we’ve chosen Naohiro Takahara. The striker enjoyed a loan spell at Jubilo Iwata before moving to Hamburg in 2003. Takahara then moved onto Eintracht Frankfurt before returning to Japan seven years ago – and, at 34, is still going strong today.