The arch-enemies come head to head once more this week as Galatasaray face Chelsea, and their turbulent history means the focus will be on the coaches just as much as their teams

For two men who have only faced one another as coaches four times in 11 years, Roberto Mancini and Jose Mourinho have developed into fascinatingly stern enemies.

The pair’s respective managerial spells at Inter, with the Portuguese succeeding the Italian at San Siro in 2008, are a major cause of the bad blood.

Now, with the duo set to clash at the Turk Telecom Arena on Wednesday as Galatasaray meet Chelsea in the Champions League round of 16 first leg, Goal looks back at some of the bitter exchanges that have left the relationship between Mancini and Mourinho far from cordial.

MOURINHO: “They played a 4-5-1 in the first game, then switched to three at the back for the return leg! Italians think of football in relation to the opponent, and change the way they play accordingly”

Mou was left perplexed by Mancini’s tinkering when Porto beat Lazio in the Uefa Cup semi-final in 2003. He would later become well known for his own tactical changes in big fixtures.

MANCINI: “Did I build the foundations? I built the roof too! The most difficult thing is to start a cycle. The rest follows as a consequence”

MOURINHO: “I don’t see Mancini’s shadow over me. I’m indifferent to it”

Inter’s run of dominance in Italy came with first Mancini and then Mourinho at the helm. Both men won two Scudetti on the pitch, but the Portuguese would also collect the club’s first Champions League title in 45 years…

…yet the Italian later claimed much of the credit for that success and suggested his successor had been fortunate to pull off the crowning glory.

MOURINHO: “Real Madrid is Real Madrid, it’s the real thing. A club no football result, no cup competition, no coach, no player can ever change. Quite simply, Real Madrid is a club like no other. There is no team anywhere that can be compared with Real Madrid. None”

After a journalist suggested that Mancini’s Manchester City were on the same level as his Real Madrid team, Mourinho put Mancini’s side in their place. But ‘Mancio’ quickly responded by telling his adversary that Madrid’s past will mean nothing in the future.

MANCINI: “It is clear that we don’t have the history like Real Madrid but Manchester City have won some trophies and we want to win now – and for the next 10 years. City will be a top team like Real, but they have a big history. That’s the difference”

MANCINI: “My son has his opinion, and I respect his opinion. Mourinho is a good manager, but it is an opinion. If you talk to Mourinho’s sons, they will say the same”

Andrea Mancini claims that Roberto is better than Jose, saying “My father knows more about football than Mourinho,” but Mancini senior plays it with a straight bat.

MANCINI: “Jose is one of the best in the world, but people should forget about the managers. It’s the players who will decide the game. What happens outside the pitch is not important”

When his Man City side come up against Real Madrid in the Champions League, the Italian is quick to turn the attention away from Mourinho and his mind games. 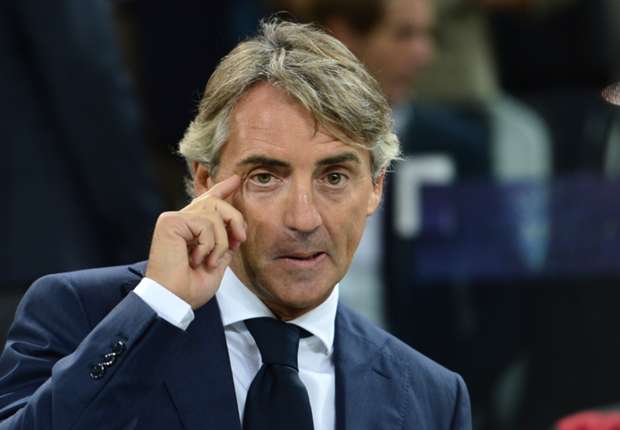 MOURINHO: “It is good that it is City eliminated because Roberto can work without any problems. If it was Madrid, the press would not let me return to Madrid! When you look at the array of players they have it is amazing that they have been eliminated at the group stage for two years running”

The Blancos chief admits he is stunned that Mancini remains in a job after their second successive early elimination from the Champions League in 2012-13. However, his counterpart doesn’t take nicely to his comments…

MANCINI: “Mourinho is not my chairman. He is not my owner. What Mourinho said is not interesting. Sometimes it could be jealousy. But I will not stay here 20 years. In this moment, I am here and we are working well.”

MANCINI: “We are not Real Madrid, who used to win every year for 100 years. We are Manchester City. We didn’t win for 35 years then in two years we won three trophies”

The Italian claims that he has left a greater legacy at the Etihad Stadium that Mourinho has at the Bernabeu.

MANCINI: “I read that one day Mourinho is going to PSG, one day he’s in Inter, Manchester City, Manchester United then Chelsea. I think he works well for this. It’s not important though. This is our job and I don’t feel any pressure”

After Mourinho is touted for his Man City job, Mancini suggests it is simply the Portuguese’s way to court attention on the market.

MOURINHO: “It’s funny because my team in the [Champions League] final had Lucio, Motta, Milito, Eto’o, Pandev and Sneijder. From 11 players, he didn’t work with six. So he made a five-a-side team because I played with only five players from his team”

Ahead of Wednesday’s clash between Galatasaray and Chelsea, Mourinho again responds to Mancini’s previous claims that it was the Italian who built the foundations of Inter’s 2010 Champions League final triumph.