AC Milan’s 4-3 Serie A loss against Sassuolo at the weekend not only saw Massimiliano Allegri’s spell in charge of the Rossoneri come to an end, it also effectively ended the active career of one of the greatest midfielders of the past two decades. On Monday, Clarence Seedorf reached an agreement with the San Siro side to succeed Allegri at the helm, and he announced his official retirement one day later.

During his illustrious 22-year career, the Dutchman became one of the most successful club players in the history of the game and he has even been described as the greatest Champions League player of all time, after winning the prestigious trophy four times with three different clubs.

Seedorf’s impressive career in European club football’s elite tournament started on a Wednesday evening in September 1994 when titleholders Milan visited the Olympic Stadium in Amsterdam to take on Ajax. The then 18-year-old was on the bench for the host, but replaced Edgar Davids in the 89th minute to make his Champions League debut in a 2-0 victory.

The cameo against his future employers was the start of what would prove to be Seedorf’s only Champions League campaign for Ajax, but it was a year that won’t be forgotten in Amsterdam. The midfielder featured for the full 90 minutes in all of the Godenzonen‘s remaining group games as they qualified for the quarter-finals with ease, beating Milan for a second time in the process.

Hajduk Split and Bayern Munich were no match for the Eredivisie giants in the quarter-finals and last four respectively, and Ajax met familiar opposition in the final in Vienna as they had to deal with Milan for the third time that season.

Although Seedorf was substituted shortly after the interval, it would still be a memorable evening for the Paramaribo-born midfielder, as a late goal from Patrick Kluivert helped Ajax to a 1-0 victory, securing the then 19-year-old to his first ever European trophy.

The youngster briefly bid farewell to the Champions League as his new club Sampdoria didn’t feature in Europe in 1995-96, but he soon returned to European club football’s elite competition after joining Real Madrid after just one year in Genoa.

His second Champions League campaign proved to be  another successful one. Madrid comfortably reached the knock-out stages in 1997-98 with 13 points from six games, and neither Bayer Leverkusen nor Borussia Dortmund could threaten Los Blancos on their way to the final, thus setting up a meeting with Juventus.

The encounter with the Serie A side at the Amsterdam ArenA was quite a special one for Seedorf as he not only returned to the city where he grew up and rose to prominence, but would also pit him against the man whose place he took on the eve of his Champions League debut: former team-mate and close friend Edgar Davids. There was little friendship between the duo on the pitch, though, as both players executed a number of crunching tackles and went into the referee’s book.

In the end, Seedorf cared little about his yellow card as Predrag Mijatovic’s 67th minute-strike proved to be the only goal of the game, allowing the influential midfielder to lift the Champions League trophy for the second time in his career.

His stay at Madrid would come to an end some 18 months later when he joined Inter, but the Dutchman would enjoy little success at the Nerazzurri, and would move on to city rivals Milan in the summer of 2002.

The capture of Seedorf was a decision the Rossoneri chiefs would not regret as the legendary Dutchman once again achieved what he had previously done at Ajax and Real Madrid – winning the Champions League instantly.

The San Siro outfit finished top of their section in both group stages, and were then paired with old foes Ajax in the quarter-finals. What should have been one of the highlights of his career turned into a bit of a disappointment for Seedorf, though, as he received a rather hostile welcome from the Ajax fans on his return to Amsterdam, rather than the warm reception a man of his stature deserved. To make matters even worse, the midfielder was forced off after only 26 minutes of play with a knee injury that threatened to keep him out for the remainder of the season.

Nevertheless, he recovered faster than expected and made his comeback in the semi-final tie against yet another former club, Inter. After a scoreless draw in the first leg, a 1-1 draw in the ‘away’ game was enough for Milan to book their ticket for the final against Juventus.

Neither side found the net in normal time and penalties eventually decided the showpiece in Manchester. Not for the first time in his career, Seedorf failed from 12 yards, but his miss didn’t cost Milan as Andriy Shevchenko fired home the winning spot-kick to earn him a third Champions League winners’ medal.

“After winning the Champions League three times, I think I can allow myself to say that I’m not afraid of anyone,” stated a proud Seedorf after his side’s hard-fought victory.

The midfielder even appeared to be on his way to his fourth European title in 2005 after once again beating Inter and Dutch opposition – in the form of PSV – in the knock-out stages to reach the final in Istanbul. However, after going 3-0 up against Liverpool, Milan lost focus and allowed the Premier League side back in the game, eventually losing an epic encounter on penalties. 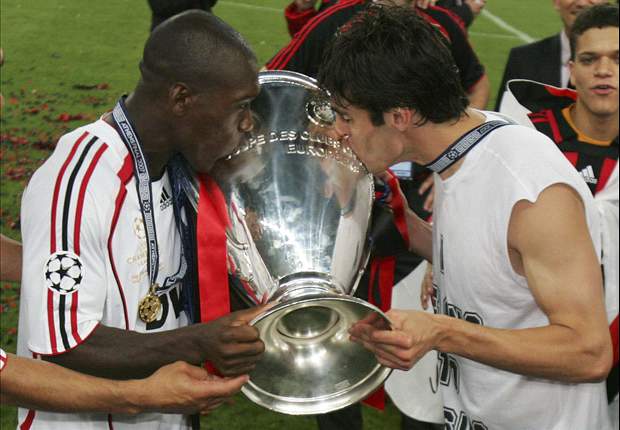 The Rossoneri would get their revenge two years later, though, as they beat the Reds 2-1 in the final in Athens courtesy of a Filippo Inzaghi double, after previously beating Bayern Munich and Manchester United in the quarter and semi-finals, respectively. Seedorf himself scored memorable goals in the second legs against both Bayern and United, while running the show in midfield alongside Kaka.

The Champions League was not the only competition where Seedorf shone, though. The 37-year-old won two Eredivisie titles with Ajax before winning La Liga once with Real Madrid, only to then add two Serie A titles to his trophy cabinet while at Milan and eventually cap a fine career by guiding Botafogo to the Campeonato Carioca title in 2013.

Only at international level did Seedorf not manage to win any silverware, as he endured a rather frustrating career with Netherlands.

The midfielder made his debut for Oranje at the tender age of 18 and played his first major tournament two years later, as he made the squad for Euro ’96. It was a tournament that would define Seedorf’s international career, though – and not in a good way. The former midfielder was at the centre of an internal row that eventually saw Edgar Davids sent home by head coach Guus Hiddink, only to then miss the decisive spot kick in the quarter-final against France.

Things would get worse for Seedorf the year after as he missed yet again from 12 yards in the 1-0 World Cup qualification loss against Turkey and the Holland fans would never really forgive the lauded midfielder for his profligacy from the spot.

He would eventually go on to make 87 international appearances for Oranje, featuring at three European Championships and one World Cup in the process, but would never achieve the same status at the national side that he enjoyed at club level.

Despite his relatively disappointing Netherlands career, however, there is no denying that Seedorf is arguably one of the best players of his generation. Very few players will be able to say that they have won a grand total of 21 major trophies in four different countries when they hang up their boots. Seedorf, though, has achieved just that – and one can only applaud his amazing career.